Eileen Galido (The Enchanted Parade)
Karen Kahler (Anime series)
Anne Finnelan (アン・フィネラン, Ann Fineran?) is a character in Little Witch Academia. She is the Magic Linguistics teacher at Luna Nova Magical Academy as well as the faculty member in charge of student guidance.

Finnelan is a middle-aged woman with brown hair tied into a bun with two fringes falling at the front, blue eyes, and pale skin complexion. She wears the standard Luna Nova teacher uniform.

Finnelan is a serious and authoritative woman, demanding respect and discipline from students. Finnelan seemed to have a preference for skilled students like Diana as she is usually kind to them. She is usually calm, but is quick to lose her temper, particularly when dealing with incompetent students and troublemakers such as Akko and company.

Unlike other teachers, she respects the most formal style of witchcraft. She is very disgusted with bad manners and always does everything to preserve the prestige of Luna Nova Academy. Said respect and dedication to preserve the academy's prestige, however, made her rigid and unwilling to compromise when it comes to dealing with crisises that threatened the academy if available solutions to solve it greatly affect both the academy's prestige, tradition, and witchcraft it taught to its students (such as Vajarois' constant sorrow where Akko believes that simply appeasing the tortured soul will only torment her further and the spirits' strike for extra magic output that instigated the energy crisis). She believes all witches should be formal, collected, and act seriously, and has a prejudice against magically untalented students and those who have a technological approach in dealing magic, which give her a highly predictable personality. Finnelan's respect on the rules of both magic and the academy made her unwilling to bend it under any circumstances nor willing to tolerate others to do the same. Unfortunately, while this gave her better strengths than her fellow teacher Ursula, Finnelan's single-minded adherence to the laws of both magic and Luna Nova and dedication to preserve the prestige of the academy narrowed her perspectives and made her unable to see tenacity and determination within untalented students that allowed them to success in the end (which Ursula ultimately called her out for), and easily angered with Akko and Ursula's clumsy front on separate occasions.

Finnelan appears imparting a special class to the students about Fusion Magic through potions. When Akko, Lotte and Sucy accidentally create a huge monster mushroom, she and Diana use the Luna Lana spell to get rid of it, praising Diana for being able to use such an advanced spell.

Finnelan then punishes Akko, Lotte, and Sucy for what happened, arranging them to stage the Blytonbury festival parade with Amanda, Constanze and Jasminka, warning them that they will all be expelled if they fail the task.

Finnelan is seen next to all the other teachers during the opening ceremony of Luna Nova, being surprised by the sudden appearance of Akko, Lotte and Sucy. She then takes Akko to her room, warning the three of them that they will have a rigorous learning process in their time in Luna Nova.

Finnelan is next to the other teachers hearing the speech of the headmistress Holbrooke and reprimands to Ursula for its carelessness and soon it discusses with Ursula about its attitude too durlce like teacher. Finnelan is taught her Magic Linguistics class, teaching about the Luna Alphabet, Diana being the only one able to understand it, won the praise of Finnelan. Finnelan observes with Ursula and Holbrooke the decay of the Jennifer Memorial Tree wondering what could be the cause. When he returns to see the recovered tree, praises Diana believing that was the responsible.

Finnelan obviously disdained Akko for her clumsiness in magic (including some instances where she unintentionally causing several misfortunes on her). She displayed narrowed perspective towards the young witch, perceiving her presence as eyesore and going so far suggested her expulsion for shenanigans she unwittingly caused to Pisces. Not surprisingly, Ursula called her out for this injustice, rightfully pointed out how her favouritism towards most excel of students narrowed her perspective towards least talented ones and troublemakers, blinding her from the best in them such as Akko's determination to overcome her shortcomings and ultimately clouded her judgement.

Akko on the other hand, still respected Finnelan as an authority figure as with other teachers and Headmistress despite their differences and the latter was discredited by Croix. While it appears Finnelan begins to acknowledge this to some degree, it took witnessing her and Diana's fight against the evolved Noir Rod that she begins to see Akko in more positive light. By the time Akko managed to fly with her own power in Tree of Leaves, it can be inferred that their relationships improve further as Finnelan is seen smiling proudly by the Japanese's success, having a newfound respect for Akko

As with Akko Kagari, Finnelan showed disdain Ursula for her clumsiness and often reprimanded her for it, but never thought that Ursula would stand up for Akko. Ursula even indirectly points out that her preference on more competent students made her failed to see genuine determination to overcome difficulties within incompetent students. As with Akko, Finnelan viewed Ursula as an eyesore in academy. She appears to have gained a little respect for Ursula when she foils Croix's plan.

Finnelan greatly respects and admires Diana for her magical prowess and maturity beyond her years. Her complete confidence in Diana leads her to erroneously credit Diana with restoring the Jennifer Memorial Tree instead of Akko in "Pappiliodya", even though Diana says it wasn't her doing. They could perfectly synchronize to perform Luna Lana with little issue.

Finnelan was the most opposed to Croix's intentions to install the Sorcery Solution System at Luna Nova. While other professors (with the obvious exception of Ursula) eventually were won over by Croix's ability to solve the crisis with the Faeries with the SSS (which unbeknownst to them she had created) and the allure of digital technology and subsidies, Finnelan remains opposed to the mixing of magic and science and has expressed her disapproval of Croix's interest in it. Rather than pure bias as with how she disapproved Shiny Chariot's idea of showing wonders of magic through magic show however, as Finnelan suspected that Croix had shady intentions which later proven right in "The Road to Arcturus".

Finnelan is a skilled and experienced witch, recognized as one of the best teachers at Luna Nova Academy. Demonstrated enough ability to use a spell as advanced and complicated as Luna Lana. She is able to create sturdy and protective magical barriers, has great ability in controlling objects, enough to impart it in Luna Nova, and like other teachers, can project images and scenes in thin air.

Also, being the teacher of Magic Linguistics, is knowledgeable of many magical languages, including the ancient Luna Alphabet.

Finnelan during one of her classes 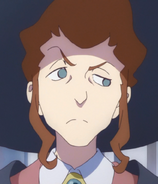