Kira Buckland
Avery (エイプリー, Eiburī?) is a character in Little Witch Academia. She is a student at Luna Nova Magical Academy.

Avery is an average stature girl. She has dark purple hair and thin eyes of the same color, with long eyelashes. In the movies, her hair is neck-length, and barely covers her forehead except for a slick of hair in the middle that is swept to her right, and having longer locks framing the sides of her face, while in the anime, her hair is shoulder-length with a longer fringe, where she parts her hair in the left and the right with part of her hair forming a triangle in the middle, and two longer longs frame the sides of her face.

For her personalized Luna Nova uniform attire, Avery's body belt and hatband are a pale shade of violet, just like the ribbon sash on her broom.

Avery is a diligent student who can be demanding and harsh at times as well as having low opinions on non-magical and weak witches who don't know the concepts of magic, explaining her poor impression in Akko when they first met. She also shown to have a dislike towards tourists, of whom she had been surrounded by during the holidays of the academy as much as those she perceived as idiots. While appeared to be a mocking girl as much as Hannah and Barbara, she is much nicer than either in comparison given how she able to get along with everyone. She loves to sing, and wants to be a singer-songwriter when she grows up.

Avery appears during the beginning of the flight class, and moments later in the landing tower where she watches Akko out of control with her broom.

She appears with Hannah and Barbara in front of the Glastonbury Ley Line Terminal to access Luna Nova, talking to each other about how their holidays went. As Akko encounters them, she and the other girls make fun of her for confusing the ley line terminal with a bus stop, and explains that she can fly to Luna Nova through the power of the Ley Lines.

Avery is seen during the classes in Luna Nova.

Avery appears formed with the other students in the welcoming ceremony of the Earl of Hanbridge and his son, Andrew Hanbridge. When they enter the hall, Avery notices Andrew's presence.

Avery appears next the other students taking the Bird Language exam.

Avery appears next to the other students of Luna Nova, giving their Fuel Spirit to Akko and Diana during their battle against the Noir Rod missile.

Avery, Hannah and Barbara share dislike and mockery toward witches who aren't from a family of witches. The three seem to have a somewhat close relationship, as they were discussing about how all of their holidays went and the current financial issues of Luna Nova.

Mary and Blair are Avery's roommates and friends. She is frequently shown with them during most gatherings, and they eat lunch together.

Avery and Akko are not seen interacting frequently. However, Avery has some contempt for her, as she insulted Akko when she stated that she isn't from a magical bloodline when they first met; this stems from Avery's personal dislike of witches from mundane bloodline. Even so, she's more than willing to allow Akko to assist her in improving her music video to raise her fame as a WitchTuber through her Sub Event in Chamber of Time

As part of her equipment as a witch, Avery has a Magic Broom and knows how to use her respective spell. 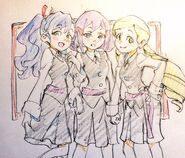 Andrew reacting to the witches by Arai Hiroki 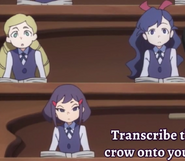