Witch, Head of the House of Cavendish(former)

Dorothy Fahn
Bernadette Cavendish (バーナデッド・キャベンディッシュ, Bānadeddo Kyabendisshu?) is a character in Little Witch Academia. She was the head of the House of Cavendish, the older sister of Daryl Cavendish and the mother of Diana Cavendish before dying.

Bernadette was very similar to Diana Cavendish with long and curly platinum blonde hair that has tea-green highlights and her eyes were not shown, but it is possible that she has light blue eyes.

Bernadette was described by Anna as a very kind and caring woman.

A witch born in the Cavendish House, Bernadette took over as the head of the family and always respected the traditions and honor of the family above all things. However, her weak body led her to die early. She often told her daughter, Diana, about the first Cavendish witch, Beatrix, as well as her hope that Diana would create a new future for magic.

Bernadette loved her daughter very much. Despite her poor health, she always found time to spend time with her and tell her stories. She wanted more than anything that Diana created a new future for magic and the Cavendish.

Unlike other witches, she did not disapprove of her daughter's admiration for Shiny Chariot, allowing her to go secretly to one of her shows abroad when she knew Diana wanted to see it more than anything.

Daryl disdains her deceased sister's compassion and stubbornness, claiming it led to the Cavendish family's dire financial situation. She projects those feelings onto Bernadette's daughter Diana, who shows the same traits.

However, after Diana returns to Luna Nova, Daryl admits Diana has what it takes to restore the Cavendish's former glory, revealing a deep love for her sister despite their differences. Her statement indicated that Daryl and Bernadette may once on the better terms (but not necessarily close) in the past until the burden of preserving Cavendish family's legacy as well as restoring it to its former glory, along with their differences in dealing it all ended up set the sisters apart in the first place.

Outwardly, Anna shows respect towards the current head Daryl, but is deeply loyal to Diana and her mother, vowing to protect what they built. 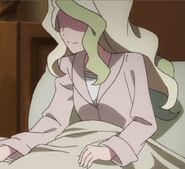