Briton Red Dragon is a species of hostile magic eating dragons. One of them, which only known as Ancient Dragon, serves as the main antagonist of the short film Little Witch Academia.

These dragons are distinguished by their vivid red body, which seems hot enough to burst into flames at any moment. Even artistic depictions of this creature seem to radiate heat.

While these dragons' egg form is yet to be revealed until this point, Briton Red Dragons' hatchlings are shown much lizard-like with red and white coloration, along with glowing yellow eyes and a pair of underdeveloped wings. As they grow, however, the red of their scales gradually blackens with their underbelly becomes blood red, with their wings, dorsal spikes, claws, horns, and armor plating around the lower jaw further developing into more prominent shape until reaching adulthood.

Briton Red Dragons have standard abilities possessed by stereotypical dragons such as flight, a long powerful tail, strong jaws, and fire breath. Their most dangerous quirk, however, is their ability to grow in accelerated rate and becoming stronger through absorbing magic from spells, potions, enchanted items, and exposure to magic energy. In fact, Briton Red Dragons feed on magic power in order to grow and even able to absorb magic from poisonous concoctions without suffering any ill-effects. In addition to this and considerable durability against physical punishments, they can sense the presence of magic energy in their vicinity within a wide radius.

As demonstrated by the Ancient Dragon, the growth rate of a Briton Red Dragon depends on the amount of magic power it absorbs. The more magic it consumes, the faster it grows. In fact, continuous exposure to magic in large amounts will cause them to grow into adulthood in a matter of minutes. This, of course, proved to be problematic for witches and wizards who attempted to stop their rampage, as they mostly rely on magic to do many things including combat. Fortunately, the amount of magic they can absorb still limited, as being overloaded with absorbed magic power will cause them to explode.

Concept art of an adult Ancient Dragon, a member of Briton Red Dragon 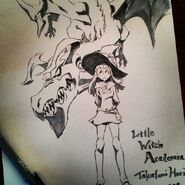 Retrieved from "https://little-witch-academia.fandom.com/wiki/Briton_Red_Dragon?oldid=43834"
Community content is available under CC-BY-SA unless otherwise noted.