Joshua Tomar
The Café Proprietor is a character in Little Witch Academia. He's the owner of Last Wednesday Society.

The Proprietor is a portly adult man with pale skin, brown hair that reaches his shoulders, a slight beard on the chin and a green tattoo on his right forearm. He wears a dark green shirt and a gray apron.

He is a kind gentleman with his clients, but he is annoyed by those who touch his products without permission and those who are not satisfied with what he offers them. He is willing to help any of his customers if they're in trouble, as seen in "Yesterday". He has shown a strange taste for the decoration of his shop.

He appears as the manager of Last Wednesday Society, a shop with magical items, where Akko and Lotte go to. When Akko asks him to lend her the Shooting Star he had on display, he refuses, as the broom is extremely dangerous. He believes that Diana will be the winner of the broom relay race.

Akko, Lotte and Sucy go to their shop asking about the abandoned house that Mr. Holbrook claims belonged to the man he most hated. He explains that he stayed with the properties of that house after the Golden Age of Magic ended and also explains that it was the Golden Age.

Akko, Lotte and Sucy go to their store looking for dresses for the Handbridge party, he offers them several inappropriate dresses that they reject. Finally he sells them the Cinderella Magic Set and offers them a discount on the Snow White Magic Set.

He sees it briefly when Akko goes to the cafe while looking for the pieces Constanze ordered. He is also seen selling his products during the Wild Hunt.

He serves Diana and Akko in the cafe after the former finds the latter in the snow, offering them somewhere to sit, along with tea. When Lotte, Sucy, Amanda, Constanze and Jasminka arrive, he offers them drinks as well, stating that they must be cold, being out in a snowy day.

He watches on television the battle of Akko and Diana against the missile from his shop, giving them his Fuel Spirit alongside everyone else.

Although sometimes dismissive at Akko's bold claims, it doesn't stop him from helping her.

As the owner of a magic shop, he must have knowledge of magical substances, equipment, and a license to use magical devices, which implies some ability with magic. He used a potion to project images of the Golden Age of Magic.

For more images related to Café Proprietor, see the file category: Category:Images of the Cafe Proprietor. 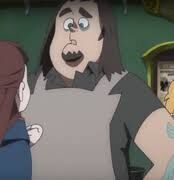 Retrieved from "https://little-witch-academia.fandom.com/wiki/Café_Proprietor?oldid=47270"
Community content is available under CC-BY-SA unless otherwise noted.