The Chariot cards (シャリオカード, Shariokādo?) were trading cards produced during Shiny Chariot's magic performance career. Collecting them was very popular at the time.

Chariot cards are collectible cards based both on Shiny Chariot's magic shows and on different creatures, locations, and artifacts of the magic world, many relevant to the life of Chariot. Each card has a large and striking illustration above their name with a description and their effects below. Being based on real magical things, some include relevant spells. There are three types of cards: moon, star, and sun, determined by the symbol at the top of the card. The bottom left shows the cards cost in its respective mana type. The bottom right corner shows the cards offensive and defensive score (o/d). The design on the back is a yellow silhouette of Shiny Chariot holding the Shiny Arc against a dark brown background, along with magical symbols such as triskellions and her name inside a ring at the top of the card, also in yellow.

Currently, Akko owns all the cards that have been made except the "A Believing Heart is Your Magic" premium card. The rare Shiny Rod card is her most precious belonging and her amulet.

The "a believing heart is your magic" premium card

The Fountain of Polaris card 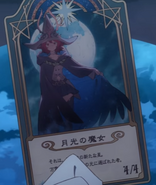