Diana's Unnamed father is a minor character in Little Witch Academia anime. Very little information about him is known.

While there's no direct mention about how he looked like, there are speculations that like Paul Hanbridge, he has sharp features and even around latter's age prior to his passing. This mainly because of the presence of a middle-aged man who sat beside the young Diana during Shiny Chariot's show, whose depiction differs between the anime and short film: 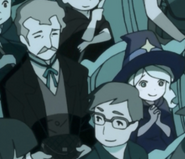 Diana and her possible father in the first short film 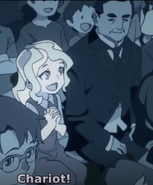 Diana with Carter, the man who initially believed to be her father until proven otherwise

Not much is known about Diana's father, but it's possible that he was a good man fondly remembered by his family and members of the household of Cavendish family.

Retrieved from "https://little-witch-academia.fandom.com/wiki/Diana%27s_Father?oldid=42898"
Community content is available under CC-BY-SA unless otherwise noted.