Benjamin Diskin
Frank (フランク, Furanku?) is a character in Little Witch Academia. He is one of Andrew Hanbridge's closest friends.

Frank is a young man with blond hair and hazel eyes. He wears his hair in an Elvis-pompadour. Although he's not always seen in the same attire, Frank's clothing always consists of a tuxedo suit paired with a shirt and a necktie. During his visit to Luna Nova Magical Academy, he wore a grayish-brown tuxedo suit, with a blue necktie and a white shirt. At the royal party in the Hanbridge mansion, he wore a blue-gray tuxedo suit with a black shirt underneath, paired with a teal necktie.

Frank is a very cheerful and lighthearted young man. He expresses an interest in witches and in magic. He is introduced as a friend of Andrew's who is accompanying him on his visit to Luna Nova Magical Academy. He is shown to have good manners, as he scolds Andrew for being rude to Diana.

Frank appears as Andrew's best friend, standing next to him during his party. They both discuss the students at the academy, showing Frank a certain interest in Diana and then being surprised to learn that Andrew and Diana know each other. He accompanies them on the tour of Luna Nova, surprised by their distant relationship due to their opposing views on magic.

Frank attends the royal party with Andrew at the Hanbridge mansion. Frank is stung by the Cupid Bee and subsequently falls in love with Lotte Jansson. However, even after the spell is broken he still retains an interest in Lotte and asks her out on a date. Although she turns him down, stating that she wants to get to know more of him before they start dating, Frank still remains hopeful, stating to Andrew that a kind girl like her is hard to find.

Amanda O'Neill and the Holy Grail

Frank is seen next to Andrew and other students entering Appleton Academy, also presented the match between Amanda and Louis.

Frank and Andrew are shown traveling in Andrew's car together. Andrew states that he must meet Akko, to which Frank teases him that he's still interested in her. Frank is soon disappointed to learn that Andrew's true meaning to meet Akko is to return her witch hat. The two soon take notice of the uprising mob, as Frank tells Andrew about the new emotion-altering app that is said to relieve the anger and tension of the users, and uses it to calm their emotions.

Frank is seen next to the other students of Appleton watching Akko and her friends chasing Noir Missile on one of his friends' computer, at which he tells his friends that the girls are witches that he and Andrew met. They then give Akko and Diana their Fuel Spirit to aid in Yggdrasil's revival and destroying the evolved Noir Rod.

As one of Andrew's closest friends, he always takes part in several major parties. Although he teases him sometimes, Frank is shown to be very concerned for Andrew and smiles in relief that Andrew is slightly interested in Akko.

In "Bee Commotion", like the rest of his friends, Frank ends up enamored of Lotte when being stung by the Cupid Bee. However, even after the spell was broken, Frank showed a genuine interest in Lotte by inviting her out. During her talk with Andrew, Frank states that although Lotte may seem ordinary, she's actually a good-hearted girl that is hard to come by.

For more images related to Frank, see the file category: Category:Images of Frank. 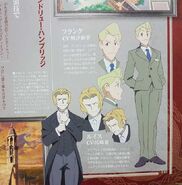 Frank, alongside Louis from Chronicle book