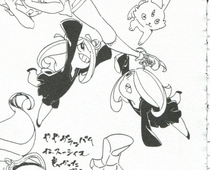 Garie and Sabi bear a striking resemblance to their older sister, Sucy. Both sisters wear short black dresses with black Mary Jane pumps, which resemble their mother's apparel. Sabi has two pigtails tied near the back of her hair to differentiate herself from Garie, who keeps her hairstyle similar to Sucy's.

Both Garie and Sabi are very hyperactive children, which makes them different from their serious mother and other sisters, including Sucy. This is because they're still young and immature.

Mrs. Manbavaran is shown to be very strict towards Garie and Sabi, demanding proper behavior from both of them, even though they're still very young. Garie and Sabi, however, don't seem to care about what their mother wants, instead continuing to do whatever they want to. However, they are subject to her will when their mother gets angry with them.

Garie and Sabi seem to have some appreciation for their older sister, although the latter considers them a nuisance. As with their mother, both are terrified when Sucy gets angry.

Special Yoshinari illustration that was included with the 2016 Teri Terio LWA manga. Sucy's little sisters were designed by Yoshinari
Add a photo to this gallery