Ghost Witch (死んだ魔女, Shinda Majo?) is a monster introduced in Little Witch Academia: Chamber of Time as both main antagonist and final boss. "Ghost Witch" is in fact, the corrupted form of Molly McIntyre resulted from Curse of Time she afflicted with from tampering with the Time Magic of Horologium Chamber's Great Clock.

In her true form, Ghost Witch is a massive, skeletal humanoid entity with long, shaggy black hair with red highlights that covers her face, a purple witch hat decorated by at 5 oval-shaped black emblems/symbols with an eight-pointed grey star inside, short tail with two rows of red spikes, and clawed hands. Her most prominent feature is ornate gear/magic circles around her wrists and back, the latter which also connects her arms with her torso. Lacking any pair of legs, she moves by flying and hovering around.

Ghost Witch is the monstrous alter-ego of Molly McIntyre born after she succumbed to the Curse of Time from an ill-fated attempt to use Horologium Chamber's Great Clock to go back in time, specifically to the day when she first enrolled at Luna Nova. Embodying her human self's despair over her inability to live a happy life at the academy as she dreamed to be, the Ghost Witch sought to fulfill her wishes regardless of its repercussions. She went on a rampage at Luna Nova before aiming for Horologium Chamber's Great Clock only to be defeated and subdued by the academy's professors.

To save their student, Luna Nova faculty separated Molly's corrupted half (which carry her powers and memories as the Ghost Witch) from her human half, splitting it into seven fragments, and contained six of them within her Classic Witch Set while leaving the seventh and final one in the Time Void behind Horologium Chamber's Sealed Door. After hidden the set's pieces in six of Horologium Chamber's dungeons, they placed a magic seal over the Chamber to both keep Molly's splintered Ghost Witch half trapped and erode the curse until she returned to normal. Without her corrupted half, Molly didn't remember who she really was and continue enrolled at Luna Nova as usual, albeit with her memories periodically reset as much as everyone's pertaining her once a year due to the curse. This would continue for decades until the first day of the summer holiday in the year Akko enrolled at Luna Nova.

As the magic seal placed over Horologium Chamber about to complete its purpose, its hold over Molly's splintered Ghost Witch half started to weaken. This, in turn, allowed the fragment in Time Void to exert its influence over its human half at Luna Nova, allowing her to remember a bit of who she was. Subsequently, Molly tricked Akko to unlock Horologium Chamber and silently manipulated the Japanese and her friends to retrieve fragments of her Ghost Witch half by undoing their attempts to break the time loop time and time again. With every retrieved Classic Witch Set pieces in their possession, the fragments' hold over Molly grows stronger.

By the time Molly undid the gang's deal with Time Demon, fragments of Molly's Ghost Witch half within Classic Witch Set has been reunited with her human half. Despite lacking the final fragment, Molly's corrupted half nevertheless attained enough strength to dominate her human self's personality, which drove her to engage a heated argument with her roommates Elsa and Amelia by mocking the former's dream to be a teacher. When Akko confronted Molly for such an argument a while later, it becomes clear that Ghost Witch has returned and now possessing her human self. After revealing her true color and how she manipulated her and her friends to retrieve her missing powers and memories, Ghost Witch, still in her human form, attempted to attack Akko only to be forced to retreat thanks to Ursula's unexpected interference. Before leaving, however, Ghost Witch scattered the Japanese's Chariot cards both to make Akko feel her suffering and cover her escape.

Shortly after the gang recovered missing Chariot cards, Akko and co. confront Ghost Witch who has regained her true form in Time Void, having reclaimed her missing fragment there. Despite being more powerful than monsters the gang encountered at Horologium Chamber's dungeons, the seal Golden Magic Age-era professors placed over the Chamber long ago has severely handicapped Ghost Witch's powers since her existence tied with Curse of Time that spawned her in Molly, giving the gang an advantage against the restored monster and eventually defeated her in the end. With the magic seal has completed its purpose and Molly is freed from the curse once and for all (though the gang's final blow on her corrupted form somehow knocked her soul out of her body until Akko convinced her to return), the Ghost Witch is no more.

Ghost Witch is arguably one of the most powerful entities in the series. She can conjure devastating spells culled from four classic elements (though only three that she can uses at a time) and which elements she channel are highlighted by the glow of her magic circles; red for fire, blue for ice, yellow for earth, and green for wind. Additionally, she can summon up to 4 elemental crystals that grant her immunity to elements they represent – they must be destroyed in order to make her vulnerable to said elements once again.

In addition of elemental abilities, Ghost Witch's connection with Time Magic of Horologium Chamber's Great Clock enables her to restore the time loop originally designed to keep her from causing more damage should she prematurely released from behind the Chamber's Sealed Door and even completely undo the whole event where Akko and co. resorted to making a deal with the Time Demon while leaving their memories intact (and subsequently convincing that the pact had failed), showing the vast difference of her might compare to the aforementioned demon. She can also summon creatures to aid her in combat.

Although powerful, the Ghost Witch is not without weaknesses. Her powers are linked to the Curse of Time which afflicted her human half Molly, and thus breaking the curse would give her foes leverage against her and even hasten her restoration into a normal human she originally was. Despite her inherent resistance against attacks, Molly can still be overwhelmed by powerful spells such as Shiny Ballista. 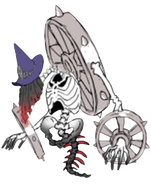 Ghost Witch in the flashback

Ghost Witch reveals herself
Add a photo to this gallery

Retrieved from "https://little-witch-academia.fandom.com/wiki/Ghost_Witch?oldid=44363"
Community content is available under CC-BY-SA unless otherwise noted.