The original short film, directed by Yō Yoshinari and written by Masahiko Ōtsuka, was released in theaters on March 2, 2013 as part of the Young Animator Training Project's Anime Mirai 2013 project,[1] and was later streamed with English subtitles on YouTube from April 19, 2013. It was also released on Netflix as an original movie, with dubs in English, European French, Italian, Brazilian Portuguese and Latin American Spanish.

A second short film partially funded through Kickstarter, titled Little Witch Academia: The Enchanted Parade, was released on October 9, 2015.[2] It tells the challenge of Atsuko Kagari trying to create a successful parade with the help of her friends of Luna Nova Magical Academy, along with the introduction of three new witch students: Amanda O'Neill, Constanze Amalie von Braunschbank-Albrechtsberger, and Jasminka Antonenko, all of whom would expand their roles in the 2017 anime television series.

A television anime series of Little Witch Academia was announced on June 24, 2016. The series began airing in Japan from January 8, 2017 and streamed by Netflix.[3][4][5] The first cour's opening theme is "Shiny Ray" performed by YURiKA while the ending theme is "Hoshi Wo Tadoreba" (星を辿れば, If You Follow the Stars?) by Yuiko Ōhara.[6] The second cour's opening theme is "Mind Conductor", also performed by YURiKA, and the ending theme is "Toumei na Tsubasa" (透明な翼, Transparent Wings?), also sung by Yuiko Ohara.[7] The series ran for 25 episodes with nine Blu-ray and DVD volumes being released.[8]

A short one-shot manga based on the anime, drawn by Teri Terio, was published in Shueisha's Ultra Jump magazine on August 19, 2013.[9] Another manga by Teri, featuring an original story, was serialized in Ultra Jump between August 19, 2015 and November 20, 2015 and was compiled in a single tankōbon volume released on January 19, 2016.[10]

A manga adaptation of the anime series, illustrated by Keisuke Satō, began to be published in 2017.

A video game developed by A+ Games and published by Bandai Namco Entertainment, titled Little Witch Academia: Chamber of Time (リトルウィッチアカデミア 時の魔法と七不思議 Ritoru Witchi Akademia: Toki no Mahō to Nana Fushigi, lit. Little Witch Academia: The Magic of Time and the Seven Wonders), is scheduled for release on PlayStation 4 in November 30, 2017 in Japan, followed by a PS4 and Steam release in North America in May 15, 2018.[12] A bonus game, Magic Knight Grand Charion (魔導戦士グランシャリオン Magical Warrior Gran Sharion), is available in Japan and the United States as a pre-order bonus.[13] 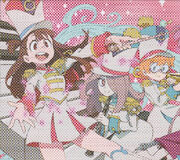 References in Other Media

Retrieved from "https://little-witch-academia.fandom.com/wiki/Little_Witch_Academia?oldid=35673"
Community content is available under CC-BY-SA unless otherwise noted.