Akko Kagari enrolls into Luna Nova Magical Academy, a school for young witches, after being inspired at a young age by a witch named Shiny Chariot. She often spends her days hanging with her classmates, Lotte Jansson and Sucy Manbavaran. However, she has trouble paying attention in class, doesn't know how to ride her broom, and is often looked down upon for admiring Chariot. Many believe she gives the wrong impression about witches. One day, as a teacher instructs the class to explore a dungeon and retrieve rare treasures, Akko finds the Shiny Rod that belonged to Chariot. Meanwhile, the top student, Diana Cavendish, inadvertently breaks a seal on a dragon that grows more powerful by absorbing magic. Noticing the Shiny Rod still has power after all these years, the teacher sends Akko and her friends to reach the Sorcerer's Stone, the source of the academy's power before the dragon can devour it and become invincible. Arriving at the stone, the Shiny Rod absorbs some of its power, allowing Akko to fight against the dragon. Put into a desperate situation, Akko hears Chariot's words coming from somewhere, that a believing heart is a magic, and with renewed conviction, she uses the full power of the Shiny Rod to destroy the dragon.

The film begins with a magic show that takes place at a stage in the woods somewhere at Japan. There, the 6-years old Akko sees what appeared to be Big Dipper on the night sky which, to her surprise, descend into the stage as seven light comets which then coalesce into an ornate beige and golden staff. Before long, the staff forms a large flower-like construct made of pure light from which its owner, Shiny Chariot, materializes on the stage. Commencing her show, she conjures a line of massive archways behind the stage followed by swarms of small, sentient animals and faeries-like constructs, one of which that approaches the young Akko. Just then, a massive dragon enter the stage, prompting to the stage performer to fly onto one of the archways with her staff's broom configuration to confront it. As Akko closes her eyes in such confrontation fearing the worst, Chariot reconfigutes her staff into a bow form with incantation "Makmur Mikmur Mektoral" and lets a conjured arrow loose, destroying the dragon into spectacular display of fireworks. Awestruck upon Chariot's performance, Akko takes Chariot's message to believe in herself to her heart, and thus have decided to become a witch like her role model someday.

Fast forward a decade later, we are introduced to Luna Nova Magical Academy, the very academy Shiny Chariot used to attend during her younger days. During a class, the now teenager Akko is dozing off during the lecture which prompts her roommate Lotte to wake her up to no avail. Noticing this, the history teacher summons a sprite which slams her head against the desk, waking her up and giving the brunette a bruised face. At the same time, we are also introduced to the academy's top student, Diana Cavendish.

At the cafeteria after the class, Akko has her bruised nose seemingly treated by her other roommate Sucy, only for the Manbavaran's medicine gave her an intended side-effect in form of turning it long and sharp much to her dismay. Lotte reasoned to Akko that this can be avoided had she not slept in the middle of the class, but the Japanese lamented how Luna Nova's subjects was so boring and wondered how Shiny Chariot was able to stand it all. This caught the attention of Diana and her cohorts, Hannah and Barbara as well as the academy's unassuming blue-haired teacher Ursula Callistis. An argument ensues when Diana called Chariot names with her cohorts don't help the situation by sneering the Japanese as a childish brat. The argument concludes with Diana giving a sarcastic curtsy and left as Hannah and Barbara laugh, but not before fixing Akko's nose with a prick of her fingers.

During the broom flight class at the New Moon Tower's flight platform, Nelson instructs her students to fly for a landing platform at the neighboring tower and discouraged them from showing off while doing so. Akko is outright nervous, as it's clear everyone except her already experienced in broom flight at least on the basest level while she has none, which doesn't help by the fact that they now standing several stories above the ground. To Lotte's shock and worry, when it's finally Akko's turn, the Japanese loses control over the broom before eventually plummets to the ground far below. Although trees below managed to slow her descent and she lands with minor injuries, the insult to injury comes in form of her broom falls on top of her head, knocking her unconscious in a rather humiliating manner.

Later that night, Lotte and Sucy reacted with mild surprise as Akko confirmed that she indeed lacked any experience in broom flight beforehand due to her mundane background. Sucy asks Akko why she didn't tell the broom flight instructor the same thing earlier, in which the brunette replies that as much as she afraid at that time, she cannot let it deter her if she wanted to become like Shiny Chariot. This brings up a topic from Akko's argument with Diana previously, prompting Lotte and Sucy to explain that Chariot has a bad reputation in magic community to to her use of magic in her show, a fact that doesn't help Akko's mood that she chose to ignore their views about her role model. For the Japanese, regardless whether it is truly the case, Shiny Chariot is still the one who inspired her in the first place.

On the next day, the students begin their first dungeon exploration test under Ursula's tutelage. The unassuming professor instructs them to find and loot treasures in the labyrinth beneath the New Moon Tower as well as warned them about monsters that infested the area. Sucy indifferently remarks the test akin to generic "dungeon crawling RPGs", whereas Lotte is unable help but worry over dangers they will face and Akko is brimming with fiery excitement. Although their teacher made it clear that treasure hunting is their main priority, Akko ends up run off challenging a fleeing small creature her team come across shortly after commencing their assignment with Lotte and Sucy follow behind her.

Ironically, Diana turns out has similar thing in mind; fighting monsters over looking for treasures. Yet, because of her already impressive magical skills, she finds none of monsters her team encountered so far worth her a challenge, which doesn't help by their remarkable loots that she perceived as mere common drops and Hannah and Barbara's constant fearful attitude. 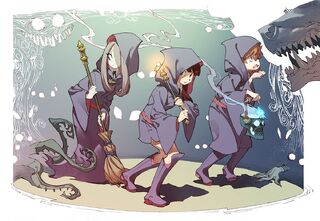 Retrieved from "https://little-witch-academia.fandom.com/wiki/Little_Witch_Academia_(film)?oldid=40086"
Community content is available under CC-BY-SA unless otherwise noted.