Witches
The Magic Wands are magical tools predominantly used by witches to channel magical energy and perform magic. They are part of the basic equipment of a witch and her male counterparter wizard.

Magic Wands can come in different designs and shapes, but they all share the same function: To channel the magic energy from the Ley Lines through the Sorcerer's Stone and in turn, allowing its user to perform magical feats. This is mainly done by using verbal spells, however, it is possible to perform magic without them. While the energy they can handle within their batteries is limited, using a source like the Sorcerer's Stone allows the magic to be used freely.

Magic wands are the main means by which witches perform their magic but there are also other objects such as the Shiny Rod and potions that also allow the use of magic.

While Magic Wands are primarily used by witches, it is not exclusive to them. Their male counterparts, Wizards, also use wands to cast magic, though this only implied and has yet to be confirmed until this point.

To improve its functionality on certain situations, the user can attach following attachments on his/her wand for such purpose:

Child Wands are typically shorter than the rest of the types, and utilized to train young witches basics of magic before continuing the study at magical schools such as Luna Nova Magical Academy.

Standard Wand is the mass-manufactured models of wands. Each design and aesthetic of this type depends on their manufacturers.

A type of wands with either non-standard design or modified from pre-existing ones. Depending on the way they created and/or modified, some possesses unique gimmicks that others may lacked. Nevertheless, they all share the same basic design.

Not all wands takes the appearance of short rod/stick-like object. Some are instead fashioned as either scepter, cane, or even two-handed staff. This variation is longer than typical wands in length, and both gimmicks (if any) and appearance may vary like custom wands do, but nevertheless share the same basic functions. Examples include wooden cane belonged to the unnamed History Teacher of Luna Nova, Holbrooke's bell-ringer staff, and Shiny Rod itself. 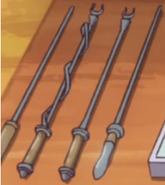 Concept design of broom and wand