Nelson is a tall woman with brown eyes and long, light brown hair collected in a braid. She wears the standard uniform of Luna Nova's teachers along with a pair of pilot's goggles, an aviator's cap under her hat, a green scarf, a pair of gloves and a parachute on her back.

Nelson is a firm and strict teacher, always orders her students to maintain their composure. She seems to take the broom-flight very seriously, prompting students not to take it lightly.

In the past, Nelson participated in a world tournament as the country’s national broom-flying representative. She also has military experience, having served in the air forces.

Nelson appears in the film giving the first broom flight class at the academy. She instructs the students to fly of safe form and not try to show off and end up causing an accident. When all the students leave the top of the tower on their brooms, Akko is too scared to do so, which causes Nelson to push her out, ending with Akko falling headlong.

Nelson appears as the broom flying teacher. As Akko and Sucy are new to Luna Nova, she gives them special instructions to join the class, but Akko turns out to be unable to fly on her broom despite Nelson's advice, missing the teacher for her unusual disability.

She later serves as referee during the Luna Nova Cup. When she notices Amanda flying without her baton pass, she disqualifies her.

Nelson appears giving the broom flight test. She gives C- to Amanda for flying recklessly and a D- to Akko for being unable to even take off the ground.

Later, she appears taking the Magic Philosophy exams to Professor Pisces. Without seeing through the obvious pantomime of Ursula, Nelson decides to help carry out the exam.

Nelson appears during the strike of the Faeries on Luna Nova, trying to prevent them to put panels to block the signal of the Sorcerer's Stone. After the end of the strike, Nelson questions how could the Faeries get the material to block the Stone's signal.

As with most of the Luna Nova faculty, she appears to maintain a healthy professional relationship with the other teachers. It is safe to assume she is friends with Professor Finnelan, as they both have an aura of strictness, as well as a friendly demeanour towards each other as shown in "New Age Magic".

In "Orange Submariner", after Professor Ursula quickly substitutes the absent Professor Pisces with a fishing jig, Nelson enters the classroom to deliver papers. She is then convinced, by way of Ursula's impersonation, that Pisces has come down with an illness. Nelson thus offers to conduct the ensuing exam herself, with the intention of allowing Professor Pisces to recover, citing that in times of need, the faculty look out for each other.

As the broom-flying instructor at the Luna Nova Magical Academy, Nelson is very capable in flight magic. She is always equipped with all kinds of flying items and can activate her Magic Broom without verbalizing the spell. She also shows being able to create a magic megaphone with her wand.

For more images related to Nelson, see the file category: Category:Images of Nelson. 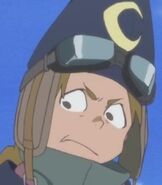 Nelson pushing Akko off a building. 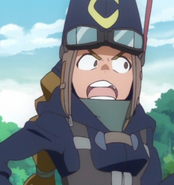 Nelson yelling at the witch students.