Badcock is a short, old woman with turquoise hair tipped sideways and a pair of rectangular lenses. She is wearing the regular Luna Nova faculty uniform on which she wears a green cloak.

Badcock is a diminutive and distracted person. She seems to be rather forgetful, forgetting an essential part of her own lesson. She's also a penny-pincher, refusing to buy any type of food other than potatoes, much to Akko's chagrin. Like Lotte, she is a fan of the Night Fall novels, but she appears to keep it secret.

Being in charge of Luna Nova's finances, she tends to be a fussy person who seems to worry about economic recurses and strictly manages things such as student equipment.

Badcock meets for the first time with all the other teachers of Luna Nova during the enrollment ceremony and is surprised by the sudden appearance of Akko, Lotte, and Sucy.

Badcock appears imparting her class of magic numerology, being its class received like most boring by almost all the students. Diana interrupts her lesson to point out an error in the numerological order she used.

Badcock puts Akko, Lotte, and Sucy in trouble for stealing a cake, provoking a discussion with Akko for serving only potatoes at school meals, leading to all three being punished by Finnelan. Badcock disguises herself as Big Ben to attend the Night Fall event in town, revealing herself to be the friend with whom Lotte has been communicating with her crystal ball. Like Lotte, she is a finalist in the Night Fall quiz and then finds herself wearing her disguise at school.

Badcock meets with all the other teachers of Luna Nova discussing the situation of the interest with Fafnir, receiving impacted the news of the theft of the Sorcerer's Stone. Later she accompanies the headmistress to see Fafnir.

Badcock appears supervising the students' development with the Metamorphosis Magic, frustrating Akko who is unable to perform the simplest level of this magic, ordering her to dominate it by the end of the day, causing her to have to stay in her room and not be able to go to The party that was organized in the school.

Badcock performs the Culinary Magic practice test, giving an A- to Jasminka for eating during the exam and then getting poisoned by Akko's misuse of the Taste Magic.

She was present when discussing the decay of magic across the world with Miranda Holbrooke, lamenting the vast difference of the world's condition compared to during the era of Golden Age of Magic and Great Age of Magic before Diana entered the office to inquire about books pertaining Nine Olde Witches.

Badcock is present alongside Finnelan and Holbrooke during the Samhain Festival.

Badcock is the most concerned about the Faery strike and the lack of money and resources in the Academy to deal with the problem. At the end she accepts Croix's introductions in the academy being that it will be 0% of cost.

Badcock is seen next to the rest of the Academy, giving their Fuel Spirit to Akko and Diana during its battle against the missile.

As a teacher in Luna Nova, she can be considered a witch with good magical knowledge. Like all teachers, she can use her wand to project interactive images and scenes in the thin air. 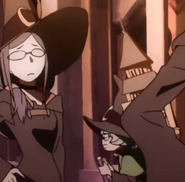 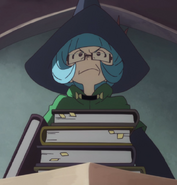