The Shiny Rod (シャイニィロッド, Shainī Roddo?) is Chariot's name for the Claiomh Solais (クラウソラス, Kurausorasu?), a magical staff with the power to break the seal of the Grand Triskellion. It was previously used by Chariot before coming into the possession of Atsuko Kagari.

The Shiny Rod is a beige medium-length staff, with a golden ornament at the end and seven crystals known as the Seven Stars that glow when used. Each one of these crystals corresponds to one of the stars of the Big Dipper constellation, as well as with one of the Seven Words of Arcturus of the seal of Grand Triskellion.

Shiny Rod is proposed to be a very manifestation of the power of the stars (specifically of the Big Dipper constellation) as well as of the Seven Words of Arcturus. The staff is manifested in the world to choose a witch to become its owner. In the past, the Olde Witch Woodward was the one who carried it and probably resorted to it to seal the Grand Triskellion. After many centuries, Chariot du Nord was chosen to become its new owner and to revive the Seven Words to break the seal of the Grand Triskellion. However, being unable to revive the last word, Chariot used the Shiny Rod as part of her magic shows. In the last of these shows, Chariot made the mistake of damaging the moon with the magic of the Shiny Rod when giving in to the pressure of the public, which caused that the Shiny Rod disappears when having lost the right to own it.

In short films continuity, on the other hand, the origin of the Shiny Rod is still a mystery, only that it came into possession of Chariot du Nord whom harnessed its powers in her shows. One day, the staff's powers mysteriously fade, leading Chariot to hide the staff in Luna Nova's underground labyrinth while she herself went into hiding and assumed the identity Ursula Callistis as one of Luna Nova's professors.

In Little Witch Academia, Akko uncovered the staff among the rubble while she looked for treasures for the class just as Diana and her teammates unintentionally released the Ancient Dragon from its seal. Thanks to Akko for believing in Shiny Chariot, the Rod was activated, much to Ursula's surprise as she had believed its powers completely faded away. Ursula then assisted Akko from behind the scene to utilize its powers to stop the dragon from consuming Sorcerer's Stone, the nearest source of magical energy.

In The Enchanted Parade, Akko has the task of preparing a parade about witches, but her plans to make a magic spectacle to show a good image of witches was frustrated by the inability to use magic outside of school. Because of that, Akko decides to use the Shiny Rod to take some of the magical energy from the Sorcerer's Stone and thus be able to use it during the parade in the town. On the day of the parade, some children steal the Rod, and its energy release the danger of a great Titan. Akko, with the aid of her friends, recover the Rod and they manage to defeat the Titan.

As in the first short film, the Rod belonged to Shiny Chariot, but after her disappearance it arrived at the hands of Akko when she was trying to escape the Cockatrice in the Arcturus Forest. Thanks to the power of the rod and help from Ursula, Akko manages to activate the Shiny Arc and open a leyline to Luna Nova, unknowingly unlocking the first Word of Arcturus in the process.

When Akko set out to find all-knowing spirit who only appears on the night of a blue moon and takes the Shiny Rod with her to a place where the supposed spirit present during that time, Blue Moon Abyss, the future teller spirit instead tested her whether she willing to sacrifice her past for achieving her dreams. Akko choose to keep her past and instead, reviving the second Word of Arcturus and defeated the spirit with a powerful strike of Shiny Rod.

The Shiny Rod is a very powerful magical object. Like a wand, the Shiny Rod can channel magic energy to cast spells, however, since the Shiny Rod also feeds on the spiritual and emotional energy of its owner, the spells used with it appear to be much more powerful and can activate magic even in places where magic cannot be used. It also demonstrates the ability to absorb and store magic energy like the Sorcerer's Stone.

The magic of the Shiny Rod only activates in response to synchronization with its wielder's emotional energy, reacting to strong feelings of her heart. The Shiny Rod can be transformed into different weapons, each of the Seven Stars can transform the Shiny Rod into a different weapon by conjuring up one of the Seven Words of Arcturus. It's implied that the Rod has some form of sentience as the staff shocked Croix, hinting that it was aware of Croix's agenda, as well as being the one who chooses the witch who becomes its owner and abandoning her to consider that she no longer has the right to be.

The true purpose of Shiny Rod is revealed to be the key to break the seal of Grand Triskellion, a kind of magic with tremendous power that can change the world. The Nine Olde Witches sealed it within Arcturus Forest due to dangers that it posed if fallen into the wrong hands. And thus, the Shiny Rod (at that time known as Claiomh Solais) exists as the only key to unlock it, if its wielder is able to revive the Seven Words of Arcturus.

The Shiny Rod in the short films.

Shiny Chariot with the Shiny Rod

Chariot riding on the Shiny Balai

Akko with the Shiny Rod

Croix is shocked by the Shiny Rod that Chariot found in Arcturus Forest.

The third form of the Shiny Rod

The fourth form of the Shiny Rod 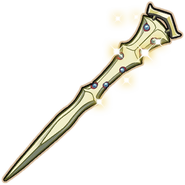 Claíomh Solais, literally "Sword of Light" or "Shining Sword", is a trope object in Gaelic folklore.

Retrieved from "https://little-witch-academia.fandom.com/wiki/Shiny_Rod?oldid=39561"
Community content is available under CC-BY-SA unless otherwise noted.