Vary depending on the type
Spirits (精霊, Seirei?) (also known as Faeries (妖精, Yousei?) in the anime series) are a collective of non-corporeal/semi-corporeal magical creatures that haunt the world. Normally, they are hidden in plain sight, but through proper techniques (ex. magical songs developed by magical families in Finland such as Janssons) one can call them from their hiding and appease them.

The appearance and abilities of the spirits vary, but they mostly appear as small entities with non-corporeal or semi-corporeal body seemingly made of light. The most common of spirits are those who born as the soul of an object that already past one hundred years at very least, thus possessing a vast knowledge over the object in question including its history. The others however, embodied elements of nature itself and not surprisingly, possess abilities and features relative to the element they spawned from.

Regardless, it's implied that spirits came to existence as the result of presence of magic in the world. In fact, they require magic energy both as the sustenance and to maintain their form outside object or element they manifested from indefinitely. Although, some spirits can also feed on alternate energy sources, such as flame faeries who consume flammable objects such as wood.

Because they can only be perceived by those who have degrees of magical skills like witches or wizards (unless they allow others to see them), spirits can be confused with Ghosts. Despite their similarities, it should be noted that spirits and ghosts are separate type of entities: Whereas the former manifested from either old objects that already past a hundred of years or being embodiments of elements of nature, ghosts are disembodied soul of once-living creatures.

While spirits mostly behave peaceful and friendly, their mood can be affected by certain types of magic used to invoke them. For example, Titan's corrupted magic drove them violent leading them to possess surrounding objects to wreak havoc as shown in The Enchanted Parade. Conversely, Lotte's ancestral song can not only appease them as much as prompt them to have fun with her, but also soothe their fury resulted from the former.

The spirits can be contracted with witches/wizards in a similar way to a familiar, so that they can stay close and give the witch/wizard his/her help and advice.

Throughout the series, various types of spirits or faeries has been introduced:

These are spirits that possess basic characteristics of their kind such as possessing great knowledge over things they inhabited, able to shift their forms in some degree to further express themselves, and able to possess objects in question giving it anthropomorphic features in process. Other than that, they lacked special abilities. Their physical appearance usually reflect on objects they reside within to some degree (ex. the faerie of Horologium Chamber's Great Clock takes the appearance of an anthropomorphic hourglass.)

A type of spirits with pyrokinetic abilities. They can sustain their form by feeding on flammable objects such as wood. The contact with water will severely weaken them. They are manifested from either flame element itself or old items imbued/charred by fire or both.

A type of spirits which possess the ability to emanate bright light from their very being and possess pyrokinetic abilities similar to that of Flame Faeries albeit in weaker scale. One of such faeries is Will-o'-chan, Lotte's familiar.

Spirits with the ability to manipulate the element of air as well as able to fly and levitate at will. This type of faery is arguably manifested from either wind element itself or old items imbued with such element or both.

Hunger Faeries are a type of faery notorious for their insatiable appetite. While it endows a witch enhanced strength upon being ingested, the faery's presence in her stomach would force her to eat a lot of food to keep it from possessing her and wreaking havoc. Once such faery lives in Jasminka's stomach due to eating it by mistake during her childhood.

Faeries which born from nature and forest itself. Unlike other faeries, they are most human in appearance and size. Females of dryads are exceedingly beautiful to look upon.

Spirits can possess inanimate objects and even give the said object anthropomorphic attributes in the process, particularly items they manifested from. Being born as soul manifested from old objects and/or element they resided within after around 100 years, they possess vast knowledge about the said items, including its history.

In addition of bright light, some spirit may have other abilities unique of their own relative to items/elements they manifested from. For example, the Will-'o-the-wisp can emit bright light from their bodies to illuminate dark places and even generate fire.

Akko and Sucy surrounded by the then pacified spirits 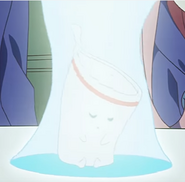 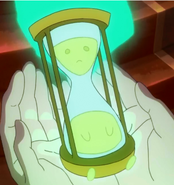 Spirit from the Horologium Chamber's clock

Spirit from a keetle