Spirits (精霊, Seirei?) (also known as Fairies in English dub and sub) are magical beings that haunt the world, residing within old objects. Normally they are hidden in plain sight, but witches in Finland developed a magic song than calls them from hiding and appeases them. 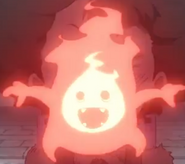 The Spirit from the Shootin Star
Add a photo to this gallery
Retrieved from "https://little-witch-academia.fandom.com/wiki/Spirits?oldid=15508"
Community content is available under CC-BY-SA unless otherwise noted.