Akko is one of Sucy's best friends. Sucy uses Akko as the main test subject of her spells and potions, much to Akko's annoyance, and has the habit of mocking Akko's poor magic skills, but they get along nevertheless. It's not surprising that they had a rocky start (in Akko's perspective), as Sucy had Akko's bird-shaped bag turned to life and peck her left eye and then scared the daylight out of her by using ropes that transmuted into snakes. However, it is revealed in "Sleeping Sucy" that Sucy considers her first meeting with Akko to be the one that she thinks is the best and most memorable memory she ever had, showing that she greatly cares about Akko even if she constantly mocks her. On the same episode, it's revealed that she thinks of Akko as an amusing person. In the same episode Akko almost kissess Sucy for the purpose of seeing if any of the potions she had on her would bring her back to the real world.

(in her perspective, Akko was depicted with a cartoonish look).

Akko and Sucy's friendship is tested in The Enchanted Parade after Sucy tries to make Akko realize the depths of which she hurt Lotte. Akko loses her temper and declares she and Sucy are no longer friends, but feels guilty afterwards. Sucy later saves Akko from falling and quickly mends their friendship, joking that she never takes Akko seriously anyway.

Lotte is one of Sucy's roommates. They are pretty good friends and often hang out together. Sucy, also with Lotte, gets dragged into Akko's wild adventures, though Sucy does not mind since she finds it fun.

In the first short film, Sucy is shown to willingly aid and support Lotte after she is injured by the battle with the Ancient Dragon. 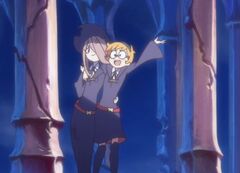 Sucy expresses her deep concern for Lotte's well-being in Enchanted Parade, chiding Akko for hurting Lotte's feelings. She encourages Lotte to not keep everything bottled up inside and tell Akko how she really feels. In the anime episode "Sleeping Sucy", Sucy showed interest in Lotte's favorite novel but kept those thoughts shut.

In "Yesterday" during the search for Akko, Sucy ended up comforting Lotte after the latter started crying about Akko, telling her that Akko would eventually come back and shouldn't express too much concern.

Sucy and Amanda are friends, as they eat lunch together most of the time, and Amanda is shown talking to her in "Orange Submariner", asking Sucy if she fed Akko "freaky mushrooms" that made her more studious.

In the last episode of the anime, they were playing a video game together while Akko tried to fly her broom.

Sucy and Jasminka appear to get along well since they eat lunch together.

Though not much is known about their relationship, Sucy may have found Diana to be a less likable character, as in the movies that played her memories in her perspective, Diana was depicted with unnaturally long limbs and a sharp, long nose, something which Akko found hilarious.

Sucy hasn't shown much how she felt about them until "Samhain Magic". After hearing the two insulting her and her friends, Sucy cracks her neck several times in disdain, showing her hatred and annoyance towards them.

Sucy admires Ursula as a teacher and Akko's mentor. She doesn't know that Shiny Chariot, which Akko idolizes, is the same person as Ursula.

In the first film, Sucy however, considers Shiny Chariot a complete fraud and mocks Akko for liking her.

Sucy admires Lukić because of her expertise in potions, poisons and mushrooms. They both have similar personalities, which might be another reason why Sucy looks up to her.

Retrieved from "https://little-witch-academia.fandom.com/wiki/Sucy_Manbavaran/Relationships?oldid=32801"
Community content is available under CC-BY-SA unless otherwise noted.