unknown
Bound Giant (封印されし巨人, Fūin sa reshi kyojin?)[1], also known as Titan (巨人, Kyojin?), is a gigantic monster which is known as the carrier of immense evil. A Titan was defeated years ago by the great witch Jennifer and sealed in the Sealing Stones of Blytonbury.

The Titan is a huge stone monster, approximately 15 meters high. It has humanoid and muscular body with a small head with two long antlers, hunched stature, and digitigrade-structured legs ends with 4 toes. It also has several red marks on its body. The Titan's body seemed to covered by strong layer of rocks around its body like armor, as armor plates on the head shatters upon struck with Akko, Lotte, and Sucy's Shiny Ballista and Spirits, revealing round head with eyes and mouth full of sharp teeth.

Due to being buried beneath Blytonbury for so long, it's left arm and right lower leg have been reduced into bones. Even the left side of its chest lis also decomposed, exposing ribcage within. Upon emerging from the ground, The Titan assimilates items and cars around it to restore its damaged body. It was also shown that it had another mouth on the underside of its feet, though it's ambiguous whether the mouth is its original trait or a construct formed on the restored feet.

Befitting to its moniker, Titan can emanate powerful, corrupted magic energies from its whole being which can be released to attack those around it and summon angry spirits to possess objects and wreak havoc. It can also use the same energy to augment its attacks as shown when it breaks free from Akko, Lotte, and Sucy's Luna Lana before punching through the sphere of the crowd's emotional energy surrounding the three.

As with its lesser kin, the Titan can magically form powerful exoskeleton made of earthen matter around their bodies, though it can do so with other non-organic materials such as cars, barrels, wooden crates, etc. and even use the same ability to patch up sounds sustained from partial decomposition due to imprisonment via. Jennifer's seal. It also has a great resistance to magic, since it takes the combined power of the Shiny Ballista fueled with great amount of Fuel Spirit to put it back into dormancy. 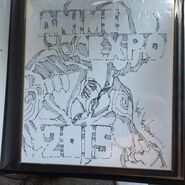 The Titan bursting out of the ground

Titan's dark tendrils
Add a photo to this gallery