This is an image gallery for Ursula Callistis. Please add the correct content corresponding to the character gallery.

The official design of Ursula.

Concept design of Nelson and Ursula. Notice that this includes a teacher with eye patch (whom hinted to be the former's early version) and Ursula smoking. 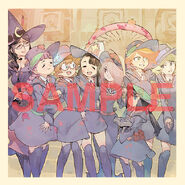 A sample Little Witch Academia illustration by Yoh Yoshinari, featuring all the girls of The Enchanted Parade, which was bandled with a Blu Ray - DVD box that came out on 20th of January, 2016. 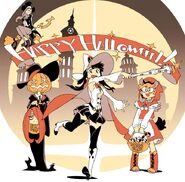 Happy Halloween illustration made by Yoh Yoshinari in October 31, 2013 for update #15 of the 2013 kickstarter for Little Witch Academia 2 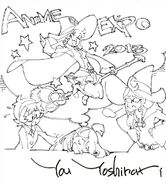 Ursula evedropping on the coversation.

Ursula suprised that Akko is at the door.

Ursula holding the Shiny Rod in the Library.

Ursula's window to from her room.

Chariot smiling at Akko.
Add a photo to this gallery

Akko and Ursula from the montage.
Add a photo to this gallery

A poster of Shiny Chariot.

SD art of Shiny Chariot from the official website.

Sketch of Shiny Chariot made by Yoh Yoshinari in August 2, 2013 on update #9 of Little Witch Academia 2 Kickstarter for reaching their stretch goal

Chariot riding the Shiny Valley during her show as seen in first short.

Shiny Chariot during her show as seen in first short.

The magical festival poster that Akko has on her wall.

Chariot using Shiny Arc in her performance as seen in first short.
Add a photo to this gallery

Photo of Croix and Chariot when they were students at Luna Nova.

Chariot as student promising that she will make everyone in the world happy while Croix stands next to her.

Chariot and Croix as students.

Chariot at the broom relay.

Chariot and Croix passing each other in the opening credits.

A young Chariot embarrassed she got stains on her uniform.

Chariot laughing about her fall.

Chariot hilariously messing up a spell.

Chariot in the shadows.

The picture of Chariot winning the broom race.

"Believing in yourself is your magic!"

Chariot in the leyline.

Chariot as a phoenix.

A photo of Chariot, who fell asleep while studying.

Chariot realizing the Shiny Rod chose her.
Add a photo to this gallery

Akko watching Chariot at the fountain of Polaris.

The entirety of Chariot's flashback.

Akko holding the Shiny Rod makes Croix remember when Chariot had it.

Ursula aka. Chariot switches to her combat suit

Chariot seemingly crushed by one of Croix's statues.

Chariot returns the statue's blast back to it

Chariot slams a stone blade against a chimera statue

Chariot being pulled into Croix's lab

Croix getting on her nerves.

Chariot saved from the Noir Dragon

"And that is our magic"
Add a photo to this gallery

Add a photo to this gallery
Retrieved from "https://little-witch-academia.fandom.com/wiki/Ursula_Callistis/Gallery?oldid=45057"
Community content is available under CC-BY-SA unless otherwise noted.