Wangari (ワンガリ, Wangari?) is a character in Little Witch Academia. She is a student at Luna Nova Magical Academy and a member of the Luna Nova News Network.

Wangari is a teenage girl of slightly above-average height. She has spiky orange hair that sticks up to the top, brown eyes and dark skin complexion. She has red, slim and elliptical markings under her eyes. Wangari, along with her roommates Joanna and Kimberly, wears a yellow sash-belt and matching hatband to go with their Luna Nova uniform.

She is very enthusiastic and boisterous, as she was very excited when narrating the broom relay race. She is also quite extroverted, loudly announcing events like the Luna Nova Cup, the Samhain Festival, and the arrival of Croix Meridies.

Wangari distributes the newspapers of the academy's announcements to the special guests of the upcoming Samhain Festival.

Wangari once again acts an announcer, narrating the events of the festival. She is especially excited during Akko and her friends' special presentation. After all presentations were over, Wangari is shown to be happy that Diana won the title of the Moonlit Witch, however, she also stated that what Akko, Sucy, and Lotte did was incredible, even if they were disqualified.

Wangari is seen standing next to the rest of Luna Nova's staff, watching the faerie spirits put panel isolators to block the Sorcerer's Stone, as she announces everything as if it were an event. When Croix and her Sorcery Units appear to save her, Akko and a few other students from being damaged by a falling isolator, she happily announces Croix's arrival. At the end of the episode, she and the rest of her team do an interview with Croix and report it in the newspaper Luna Nova.

Wangari appears next to the other students of Luna Nova giving their Fuel Spirit to Akko and Diana during their battle against the Noir Rod missile.

Much like the other students at Luna Nova, she is shown to admire Diana, running towards her to interview her before the broom relay race started.

Presumably, Wangari has a decent knowledge of flying brooms, as she was hosting the broom relay race.

For more images related to Wangari, see the file category: Category:Images of Wangari. 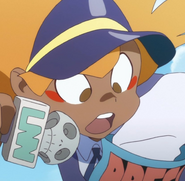