Will-o'-chan is a Will-o'-the-wisp Spirit and companion of Lotte. It generally rests inside a plastic skull and given that it illuminates its surroundings it can be used as a sort of lantern. The spirit also rests atop the Crystal Ball.

This green spirit possesses cartoonish appearance with large fiery round head (which only had eyes and mouth) and small body and limbs.

Lotte pulls her spirit from the lamp to light the path in the labyrinth that she, Akko and Sucy walked. The spirit stays with it the rest of the incursion.

The spirit is seen next to Lotte while she makes the plans for the parade and while observing the drawing of Akko, in both cases tries to help her and to make her feel better. The spirit helps Lotte to calm the spirits that had been uncontrolled during the parade.

Will-o'-chan is seen on its lamp that carried by Lotte as she and Sucy express their agreement in aiding Akko in her plan cheer up Vajarois rather than allowing themselves to be the sacrifice which will only prolonging her suffering.

In the last episode, Lotte uses this spirit to spit fire on the broom to ignite Sucy's Pyro Booster Potion to further accelerate their combined brooms in aiding the group chasing Noir Missile.

As a Fire Spirit, Will-o'-chan can generate fire, which can cause a large circle of flames. In addition, it can emit a strong light of its body, being used by Lotte like a sort of lantern. 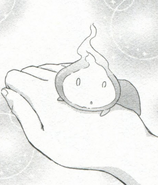 Add a photo to this gallery
Retrieved from "https://little-witch-academia.fandom.com/wiki/Will-o%27-chan?oldid=34304"
Community content is available under CC-BY-SA unless otherwise noted.