Tara Jayne Sands
Woodward (ウッドワード, Uddowādo?) was one of the Nine Olde Witches who founded Luna Nova Magical Academy, as well as the mentor of Shiny Chariot. Her spirit resides in the Arcturus Forest, a sacred forest that young witches aren't able to enter, and the Blue Moon Abyss as well, which is a secret location only accessible during the night of a blue moon.

In her true form, Woodward's spirit is a beautiful woman with pale skin, long teal hair and green eyes. She wears a dark green dress adorned with plants and long sleeves along with a wide wooden skirt next to a tiara composed of leaves and flowers. The tiara has two grill-horns on the top part.

In her appearance before Akko, she takes the form of a huge, monstrous creature composed of branches, with a feminine face similar to her actual face.

Woodward is known for her great wisdom. It is rumored that she knows all things of the past, present, and future. In reality, she is not omniscient and there are questions she does not have answers for, but they cannot be answered by anyone else. When she first appears to Akko, Woodward tries to force her into giving up her ambitions and past. In actuality, she was testing Akko in order to see if she is worthy enough to wield the Shiny Rod, and continues to show these traits in order to test her.

Despite her reputation as a revered figure with great power and wisdom in magical world, there's a darker side to Woodward that Ursula/Chariot and Croix learned in harshest way possible; though well-intentioned from the beginning owing to her genuine smile upon seeing her former protégés mended their relationship and worked together to save the world, Woodward proved herself jaded and aloof than she lets on, which further exacerbated by how distant she became towards the living due to her time as a spirit who able to move back and forth between afterlife and land of the living. Unlike Ursula/Chariot who makes best approach in guiding her students, Woodward constantly uses vague hints, trickery, and manipulating events from behind the scenes at expense of their well-being as long as things went into her favor. In her blind pursuit for Yggdrasil's restoration, she would prioritize everything on Chariot while also being neglectful to Croix at the same time, which unfortunately led to the latter's fall to villainy. Yet at the same time, she still distant towards Chariot because of too focused on such goal as opposed to Croix's accusation of her showing favoritism over another in "The Road to Arcturus", even leaving her to fend for herself for at least a decade after she lost the right to the Shiny Rod. Her worst and most debatable action was when she abandoned Chariot and Croix at the mercy of the then out-of-control Noir Rod, costing not only their ties but also endangered their lives even if it means to give the way for Akko and co. to appear on their side and subsequently, allowing Akko to unlock the Final Word of Arcturus. Overall, Woodward is a wise figure whose cryptic and detached nature made her not the best role model for her protégés, but not necessarily the worst either.

After eventually passed away, her spirit resides at the Blue Moon Abyss and the Arcturus Forest.

In the past, Chariot and Croix entered the Arcturus Forest in hopes of Croix getting the Shiny Rod but instead, Chariot ended up getting the rod. Woodward's spirit then tasked Chariot to search for the Seven Words and release the Grand Triskellion. After several years, Chariot failed to open the Grand Triskellion and after damaging the moon's surface with the Shiny Arc, she lost possession of the Shiny Rod, and it returned back to the Arcturus Forest.

Woodward makes her debut as the blue moon spirit, who is said to be omnipresent and resides in the Blue Moon Abyss, an area only accessible during the night of a blue moon. After Akko makes it to the bottom of the abyss, Woodward, disguised as a monstrous spirit, appears before Akko. Woodward asks what she wants, and Akko questions if she can ever become like Chariot. Woodward's disguise states that it is not happening, yet she can give Akko the bright future, at the cost of all her past memories and friends. Akko, however, isn't willing to forget all her past memories and friends in change for being exactly like Chariot. Woodward's disguise commands Akko to leave, telling her that she will never be like Chariot. Akko, accepting the fact that she can't be Chariot but still can be a great witch, revives the second lost word and transforms the Shiny Rod into an axe, and uses it to damage Woodward's disguise, which reveals her actual spirit, and makes appear a vision of the future strike of the fairies, war in the country, and the dark shape of Croix. Akko passes out on the ground before Ursula, who is revealed to be Chariot, comes in and greets her mentor. Woodward and Chariot have a discussion about how Akko passed her trial and revived the second lost word. Before disappearing, Woodward states that Chariot must guide Akko to unseal the Grand Triskellion. A drawing of her also appears in the manuscrit about the Grand Triskellion Diana's reading in the Luna Nova Archives.

She controls the magical mirror that transforms Akko's appearance to that of Diana's, and then briefly appears inside the mirror, as three leaves representing the first three Words of Arcturus flutter at the bottom of the mirror's base.

She appears in this episode during a flashback in Arcturus Forest, talking to Chariot and Croix about the seven lost words and how to revive them.

In a flashback, Woodward appears before a young Chariot and Croix. Woodward chooses to give the Shiny Rod to Chariot, much to Croix's disdain, which leads her to scream at Woodward. Woodward ignores Croix, commands Chariot to search and revive the seven lost words, and then disappears.

The Road to Arcturus

Woodward starts broadcasting Akko and Diana flying to save the world, tempting everyone to lend their Fuel Spirit and assist the two. She appears again after Akko and Diana release the Grand Triskellion, happily watching as the world-changing magic spread throughout the world.

Woodward is the mentor of Ursula, whom she knows as Chariot. Ursula admires and respects Woodward as her professor. She taught her that people don't get what they want but what they had put effort through their experiences, a teaching that Ursula would later pass to Akko. Woodward also taught Ursula the second Word of Arcturus, Phaidoari Afairynghor. Before disappearing again, she entrusted Ursula to make sure that Akko will fully awaken the rest of the Seven Words of Arcturus in order to break the seal of the Grand Triskellion.

The relationship between Chariot and Woodward took the worst turn in The Road to Arcturus, where it came to light that Woodward's negligence towards Croix was what caused her former best friend to become the bitter person she is now. With the second Quest seemingly failed once more by Chariot and Croix, Woodward's patience has reached its limit that she chose to abandon the two to their fate. Dismayed that her respect towards Woodward was betrayed through the harm Woodward done to her former best friend, Chariot decided to put aside her original quest for Grand Triskellion to protect her loved ones from more harm, even if it bear the consequence of bringing the magical world to an end. It's unknown whether the two later made amends to each other in the end.

Despite being chosen by the Shiny Rod, Woodward was incredibly wary of Atsuko, possibly either due to the first failure of the Quest of the Seven Words or she was taken aback by Atsuko's fiery personality or both. However after Atsuko proved herself by gaining the Second Word of Arcturus, Woodward started to treat her the same way she did with Chariot when it came to testing her resolve. Atsuko eventually did surpassed Woodward by helping to mend the relationship between Chariot and Croix and restore magic throughout the world. These actions earned Woodward's respect.

In the past, Croix was eager to obtain the Shiny Rod and release the Grand Triskellion in hopes of becoming the world's greatest witch. When Croix and Chariot arrived at the Arcturus Forest to finally get the Shiny Rod, Woodward only gave the rod to Chariot and tasked her to find the Seven Words after hearing Chariot's dream. This lead to Croix becoming a very bitter person towards both Woodward and Chariot to the point where Croix believes that Woodward made a mistake in choosing Chariot as the wielder of the rod.

The entire reason that Croix wanted to find the Grand Triskellon was to become the greatest witch, but her plans were thwarted by Woodward. This is the reason why, at the end of series, when professor Woodward appears and shows her the true Grand Triskellon, she freaks out because the "word altering" magic she was after wasn't what she thought it would be. However, at that very moment, it became evident that Woodward also proved to be neglectful towards Croix that she allowed her to lost her way as Croix herself pointed out, and left her and Chariot in shame from both what Croix had become and her own part in it.

Being one of the Nine Olde Witches, Woodward is an extremely powerful witch, being able to use magic without the help of Sorcerer's Stones and attained enough power in life to be able to return as a ghost to guide and watch over younger generations of magic users while retaining her magical abilities. She is greatly proficient in magical phytokinesis, and is able to broadcast scenes and events into devices such as television and mobile phones. Woodward was the original wielder of the Shiny Rod.

For more images related to Woodward, see the file category: Category:Images of Woodward.

Woodward as seen in the Little Witch Academia Chronicles book.

Foreshadowing of Woodward and the Nine Olde Witches.

Woodward in the first opening.

Picture of Woodward in an ancient book. 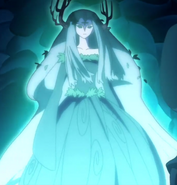 Woodward's form when she appears to Ursula.

Woodward seen in a magic mirror.

Woodward in her first apparition to Chariot and Croix.